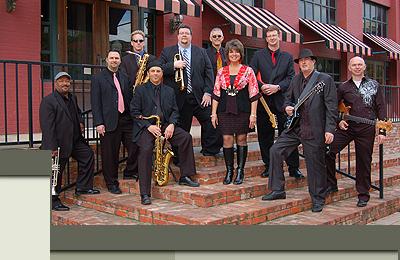 Bio Click here for their updated website : www.elephants.bands.us.comElephants Gerald, now called The ELEPHANTS, was formed in 2000 by two Waco musicians, Steve Hart and Eric Zadnik, who had a vision of a single band that could perform any kind of music, from rock to r&b, funk, soul, pop, blues and swing.  One band playing so many styles of music?  Why, for such a band to exist, they would have to recruit the finest musicians in the world!  Everyone said it was impossible.  Friends and family laughed at them.  They were ridiculed and sometimes even beaten!  The result is an incredibly versatile band with a four-piece horn section that can play any kind of music for any kind of event.  Who’s laughing now?   What happened to Gerald?  Well, even a good joke can grow stale, especially when it needs explaining.  There were the strange looks - “Ella Fitz who? But I thought she died!”  Yep, unfortunately, but thanks for asking.  The stylistic confusion - “So you play big band swing?” Well, we’re big and we can swing...but wait there’s more!  Anyway, the herd went into a huddle, and we came back to near where we started...we gave Gerald walking papers and became The ELEPHANTS!  We’re big and we can be as loud as we need to be, adapting to our surroundings.   We’ve opened for top national acts such as The Temptations, been selected as the number one wedding band in Central Texas by The Wacoan Magazine’s readers poll, and played weddings and corporate events all over the state.  Whatever the occasion, this herd of talented players are an unstoppable musical force that deliver an enormous music experience.  We are The ELEPHANTS!