A desire to recreate the spirit & enthusiasm of the British Invasion and America's subsequent retaliation led to the formation of The Fab 5 in 1990. The Fab 5 is a Houston-based tribute band performing the greatest hits of THE BEATLES, THE ROLLING STONES, and many more! With their timeless tunes, 60s period Beatles suits & Carnaby Street Fashions, Hofner, Rickenbacker, Gretsch and Ludwig vintage Beatles instruments, authentic VOX amplifiers, style and humor representative of the times packaged in tight, production based performances, The Fab 5 have gained recognition as a leader in the fun-oldies tribute market. The Fab 5 has been a fixture to the Houston Music Scene for over 20 years. It is a sincere dedication, professionalism, & attention to detail that have become hallmarks of The Fab 5, as evidenced by their impressive client list. Relive the days of BEATLEMANIA each time you see The Fab 5. They are not only a BEATLES TRIBUTE BAND, but one of the BEST 60s TRIBUTE BANDS in the nation. In October 2007, The Fab 5 were also featured in The New Musical Express in England as one of the Top Beatles Tribute bands in America.
The Fab 5 have had the good fortune to share the stage with such great acts as The Beach Boys, Peter Noone & Herman's Hermits, Johnny Rivers, America, The Turtles, The Temptations, Three Dog Night, Tommy James & The Shondells, Chubby Checker, Gary Lewis & The Playboys, Little Richard, Paul Revere & The Raiders, and may many more thru the years. Whether it's a festival concert, private corporate function, high school reunion or a nightclub engagement, The Fab 5 consider it a great pleasure to bring to life some of the best music of the 60s, 70s, & 80s and to rekindle those special memories. To enjoy these anthems live and in color is what audiences of all ages have twisted, shimmied, and shook to for over 20 years (and counting). Remember, The FAB 5 is "WHERE THE ACTION IS" and we look forward to seeing you at our next "SHINDIG".
Joe Baiardi
Electric Bass Guitar/Guitar and Lead Vocals


Joe originally hails from New York City. Joe started playing professionally at the age of 12 (beginning in the wedding band circuit). His first love was playing the drums but soon taught himself to play the guitar, bass, & piano. Joining up with friend Omar Sanders, Joe began playing in various high school bands in the 70s like "Reaper", "Centaur" & "Exctasy". By 1979,he formed "Rubber Soul" (1979-1983), a successful Beatles tribute band. Joe always wanted to perform Beatles music ever since he met John Lennon in 1976 on Broadway & 52nd street in Manhattan. "Rubber Soul" toured up and down the east coast playing Beatles conventions, Festivals, and dinner theaters in the early 80s. Joe and Rich Testa (who portrayed "John" in "Rubber Soul") also began writing together and wrote lovely pop songs like "She's Changed" which is featured on the new FAB 5 CD.
In 1983 "Rubber Soul" disbanded, Joe joined "The Elevators" (1984-1987), a new wave original pop group in Manhattan which penned and recorded original dance music. The band played all the Manhattan's hot spots like The China Club, CBGB's and The Bitter End. One of the songs "Whatcha Gonna Do" was featured in the 1984 movie "Perfect" starring John Travolta and Jamie Leigh Curtis. It helped that their lead singer Brant Mewbornwas also a senior editor with Rolling Stone Magazine. We hung out with the likes of RuPaul and Michael Musto. "The Elevators" were suppsoed to be signed to EMI's new "MANHATTAN" label, but were beat out by "BALTIMORA" (who had the hit "Tarzan Boy"). In 1988 Joe relocated to Houston, Texas. Brant Mewborn died in 1989. Rest In Peace my old friend.
Joe took a break from playing in bands until 1992, when he answered an ad in The Houston Press and joined "Troy Hess & Dangerous Livin'" (1992-1996) and continued on with Troy Hess in "Zebra Three" (2000-2002). In 2000, he was offered the "Paul McCartney" role in the national Beatles tribute act "Come Together". This also lead to performing with "The Cast of Beatlemania" as their "Paul" fill in for original cast members Mitch Weissman and Lenie Colacino. Joe has done "Cast" shows in New York, Detroit, Boston, Florida, Seattle, Oklahoma, Dallas, and Minnesota. His love and appreciation for Music of the 60s will always remain his first true love, which is what lead him to join "The Fab 5" on February 2, 2003. That magical musical chemistry between the current line up makes "The Fab 5" one of The Premier Party Bands in the nation!

Scott Bland
Keyboards and Vocals
Scott was born in Houston in 1973 one month before Bruce Lee died. This traumatized him and he immediately became a keyboard and guitar Ninja. He started Piano as soon as he was old enough to sit in his mothers lap and hit the keys, and never looked back from there. He was all state Jazz on guitar and choir in high school and went to Lamar University on a Guitar/Piano/Vocal Scholarship. He promptly dropped out after 1.5 years proving once again that talent does not equal good decision making. He has toured the country and played in various bands and as a solo pianist since the age of 16. He is proud to be a part of the Fab 5 Family. Scott is one of the most highly acclaimed keyboard and studio players in Texas, having performed on many Jazz and Rock sessions. He has state of the art gear and his attention to detail in learning songs accurately is astonishing. He brings life into many songs like "Nights in White Satin", "I Am The Walrus", "A Day In The Life", "Live and Let Die", and "Superstition" among many others. With a vocal range from Freddie Mercury to George Harrison his vocal style will mesmerize you. Scott does his own custom programming on all his sounds on his Kurzweil 2661 and he captures the 60s sounds of the Vox Continental, Hohner Pianet, Mellotron Stings and Flute, Wurlitzer electric piano, and the Hammond B-3. He injects life and spirit into The Fab 5's 1960s and 1970s classics like you've never heard before. You ain't seen nothin' yet........
Chuck Essick


At age nine, Dr.C stuck his head into a stereo speaker to better hear "I Want To Hold Your Hand", and the rest as they say is history. His first bands in middle and high school won numerous talent show prizes and played at local venues all over town. In the late 70s he moved up onto the club and party circuit with his band "Crystal", a highly sought after black Top 40 band touring the southeast. Dr.C then took a 20 year hiatus from music while he earned a Master's Degree and began a career & family. In 1996 he formed the legendary North Houston band "Strange Brew" (one of Houston's Best Classic Rock Bands). Dr.C joined "The Fab 5" in January 2000, and his style of guitar playing was a refreshing burst of energy to the band. He is a certifiable lunatic onstage, jumping and dancing and frequently leaving the stage to party with the dancing crowds! A welcome addition of talent to "The Fab 5" family.
John Lassen

John started playing the guitar because his older sister was doing it and she was the favorite. Scarred for life, he vowed to get better. It's amazing what a little sibling rivalry will help to accomplish! His first stint as a guitarist was with the rock group Saffire. In the 1980's John worked with original progressive-rock group Blown Rose and then with country-rock group Black Rose. In 1997, he made a solemn vow never to work in a band containing the word "rose."
John has played around the USA and the UK in folk, rock, country, and progressive original music groups and has lent guitar, keyboard, and vocal parts to a slew of recordings all over the planet. Most recently, he has played lead guitar and keyboards for Houston favorites Hidden Agenda and Strange Brew. He is honored to be asked to join the Fab 5 and works hard to reproduce the lead guitar parts of those timeless Beatles tunes exactly as George did.
(Ringo) Rod Robert
Drums and Vocals

Rod was born in Shreveport, Louisiana, one week before the Beatles first performance on the ‘Ed Sullivan’ show. The son of a military man, he moved to Italy as a young boy during the period when much of the music he plays with "The Fab 5" was new. “I think that’s why this music is so familiar to me--my mother loved the Beatles and all of the British Invasion bands. She played her records in our house, on base, all the time so, I got a good dose of it as a kid very early on. I think it was a connection to home, back in the states. She sang professionally at officers clubs, supper clubs--sang all styles--from big band tunes to all the popular hits of the day. She did a mean version of ‘Whiter Shade of Pale’.
After returning from over seas, Rods’ family opened a musical instrument store in Houston in the early ‘70’s.  Growing up and working in the family business, it seemed only natural that Rod would pursue music as a profession, both as a player and business owner. Today, he is the proud owner of Humble Music Center Music Services and specializes in the collection and restoration of vintage guitars and of course, drums and drum sets. However, it is performing on stage that gives Rod his biggest thrill--and there have been many stages spanning his 25 year career.
Rod has always stayed active performing everything from country and rock to swing, blues and R&B. This versatility has led to opportunities in the studio, recording with the likes of Texas singer/songwriter/stylists Davin James and Clay Farmer, along with musicians extraordinaire Paul Burnett and Robert DiBlanco. With characteristic enthusiasm, Rod says, “SHOWTIME—that’s when the music comes alive!” Call him ‘RingoRod’ or ‘ModRod’, he has the uncanny ability to mimic the drummers he portrays, while keeping solid, steady time, and  always flashing that Cheshire-cat grin. Rod, who joined the band in March 1991 after a phone call from a go-getter who would turn out to be ‘Hullabaloo’ Bill, is responsible for the bands foray into costuming as he is" The Idea Man". "The Fab 5" is so much fun, the tunes are timeless, the camaraderie is great and like-minded with years of experience.  When we play, I just embody that spirit. As the drummer, its got to groove to be Groovy Baby!”  Rod’s drumming influences include:  Ringo's’ musicality,  Keith Moons’ intensity, Mitch Mitchell's’ style, John Bonham's’ kick, Ian Paices’ snare, Mel Taylor's’ class, and Sandy Nelsons’ “Let There Be Drums”!

The Beatles Hits
Should I Stay or Should I Go
Whip It
What I Like About You
867-5309 (Jenny Jenny)
Just What I Needed
New Years Day
In Cars
80s Pop & Wave
Domino
Play That Funky Music
Miss You
Soul Man
A Little Bit Of Soul
What I Say
Superstition
Hold On, I’m Coming


To Love Somebody
Can't Help Falling In Love 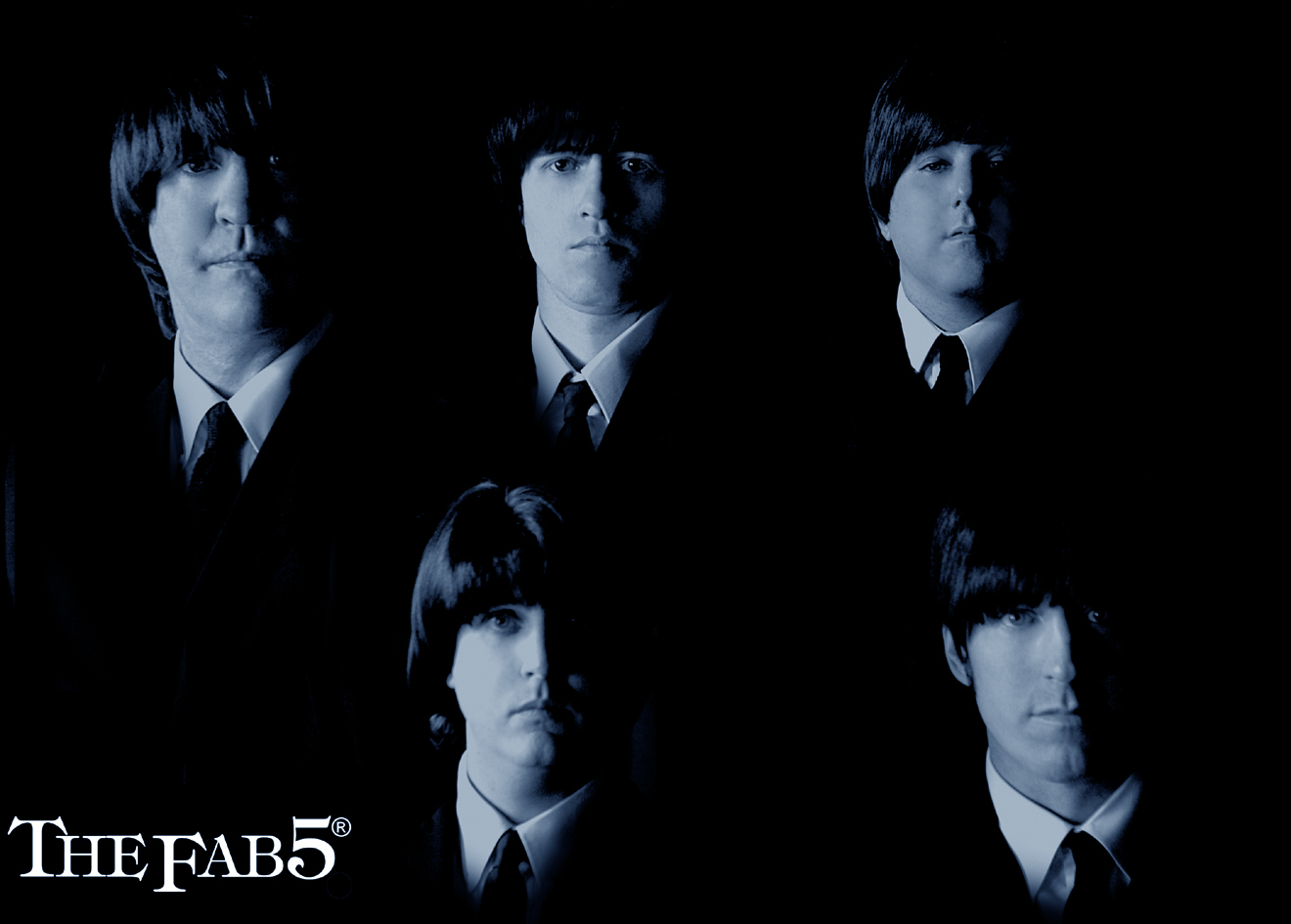 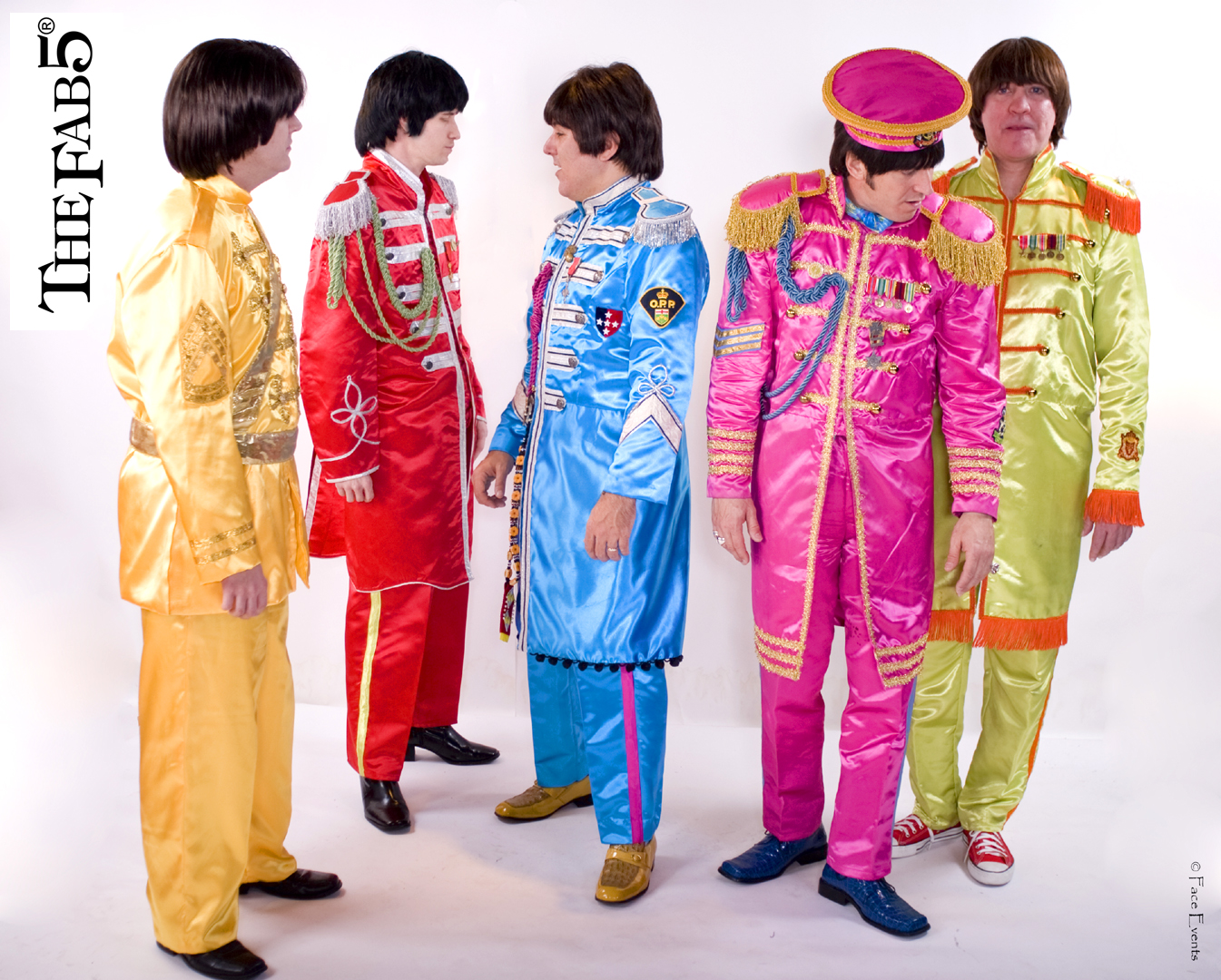 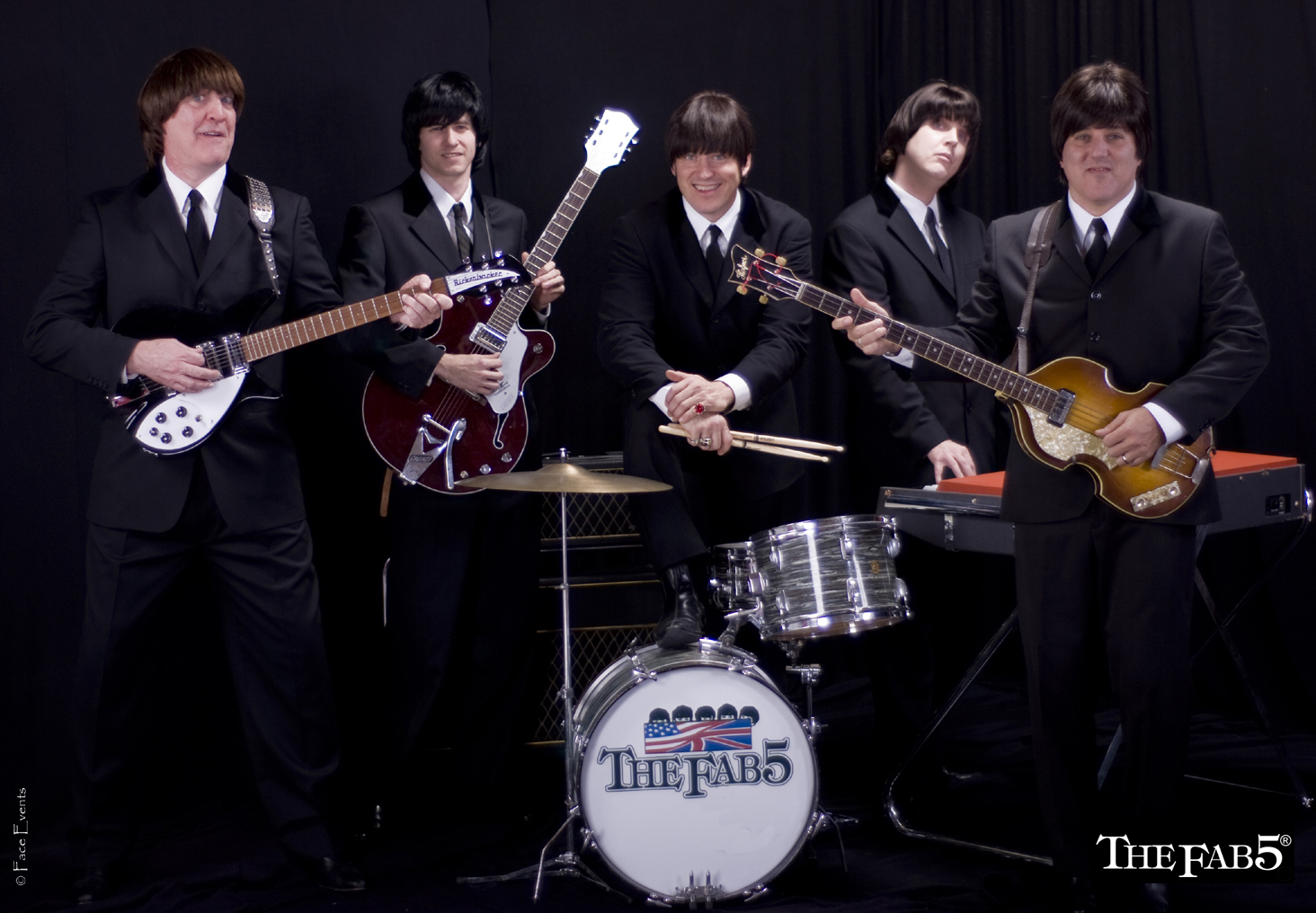 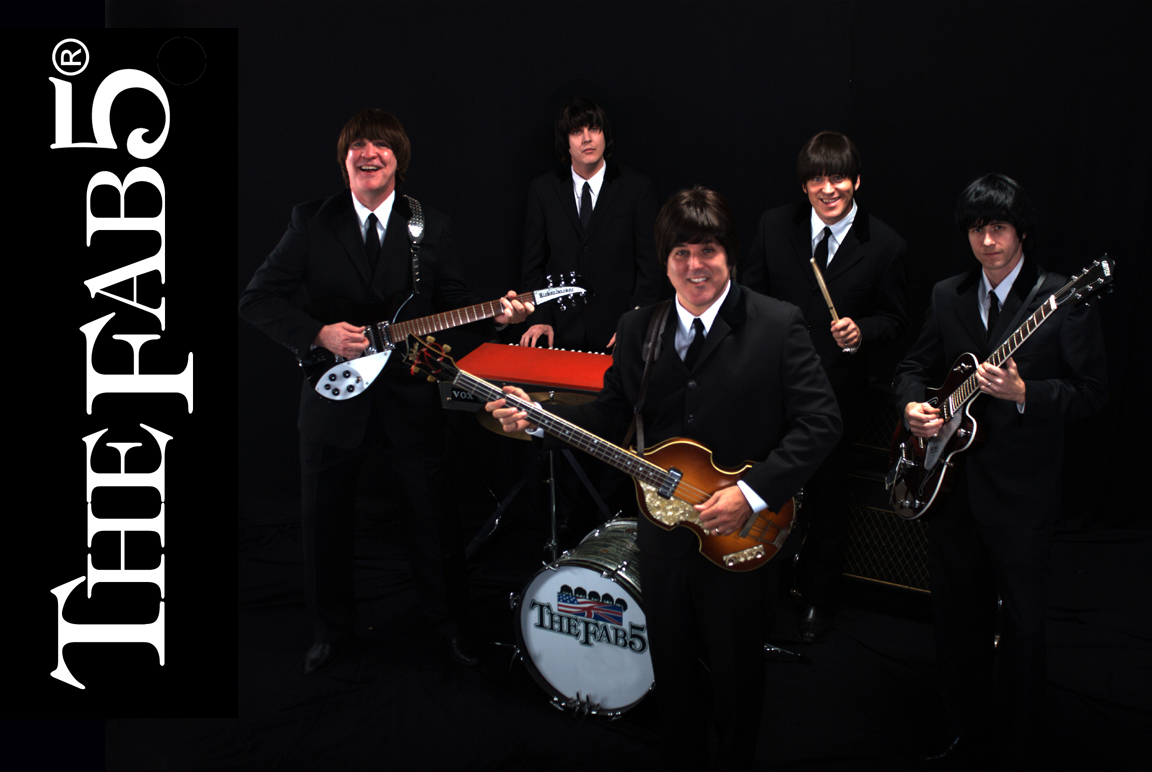 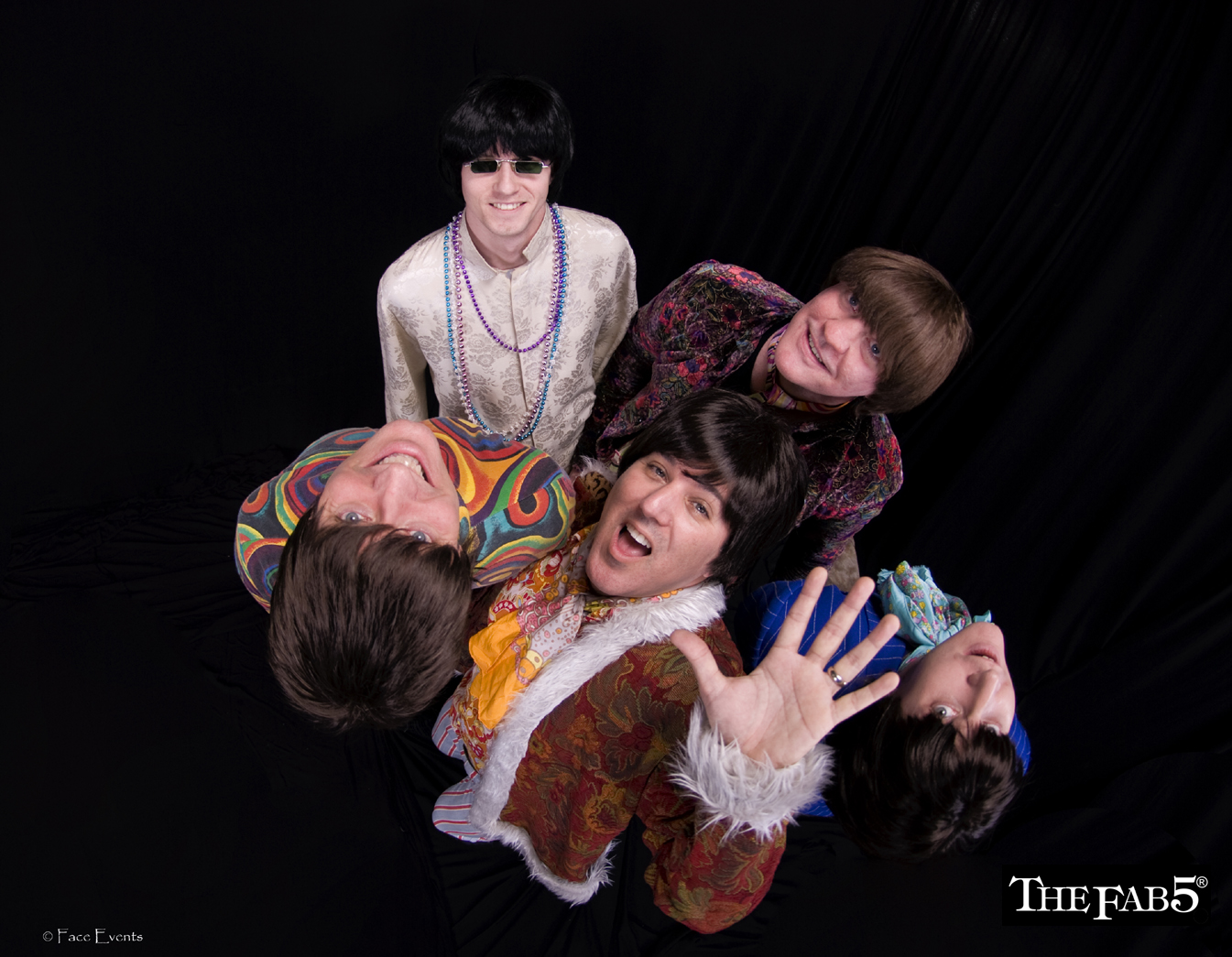 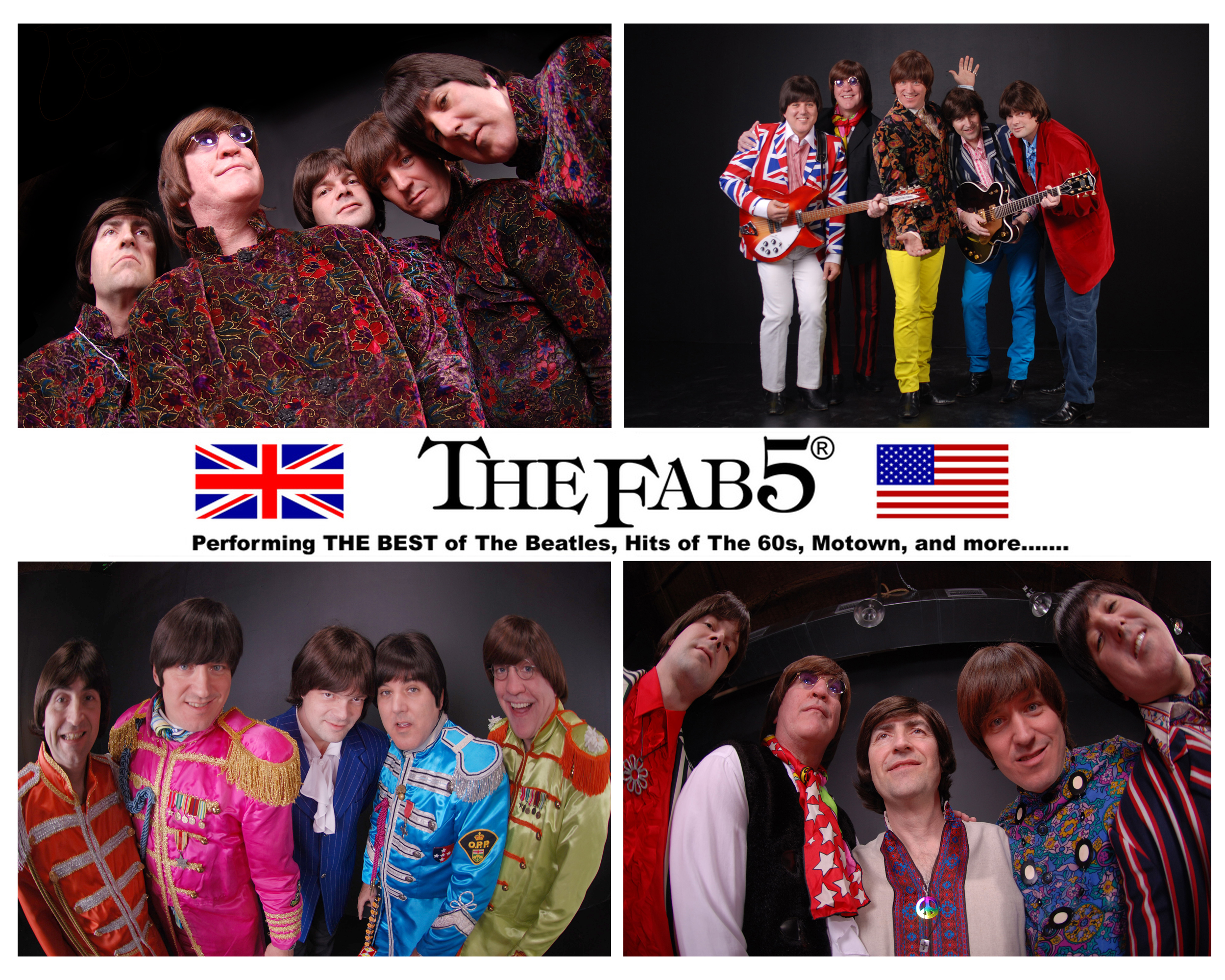