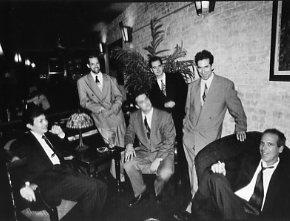 Craig Marshall is the founder and leader of The Lucky Strikes. Originally from upstate New York, he moved to Austin in 1991 to pursue a full time career in music. He has written and performed in many musical styles but has focused mainly on jazz and swing for the last ten years. He doubles as the vocalist and guitar player, but also has the roll of songwriter for the band's original material. Craig enjoys the challenge and satisfaction of writing and playing new songs that are in the style of the classic pop standards yet still sound fresh to today's listeners. Craig has just released a new solo album titled "Popular Crimes." You can find out more information here.

Milan Moorman hails from Portland, Oregon. Milan is the original "horn section" for the band playing trumpet in the early days when we performed as a quartet or trio. Most of our catchy horn arrangements are based on his solo work from that time.
Freddie Mendoza, a native of San Antonio, Texas, has been recognized by many as Austin’s top call trombonist, and has been a fixture in the local Austin music scene since 1987. Freddie has performed with many of the most recognized musicians in jazz. This impressive list includes such legends as Dizzy Gillespie, Wynton Marsalis, Clark Terry, Frank Foster, Bill Watrous, Rob McConnell, Bob Mintzer and Harry Connick, Jr. Freddie is consistently recognized by the Clarksville/West-End Artist’s/Critics Poll as “Best Trombone Player in Austin” and “Best Arranger in Austin.” In addition to his accomplishments as a performer, Freddie has achieved tremendous heights in the field of education. His skills as an educator have led to his most recent appointment as Director of Jazz Studies at Southwest Texas State University in San Marcos.

John "Salty" Salmon may be the newest and youngest member of the band, but he swings like a seasoned pro on the drums. His fiery playing brings a big band feel and sound to this quintet. Salty has crafted his sense of swing with such Austin acts as The Jazz Pharaohs and the Asylum Street Spankers. 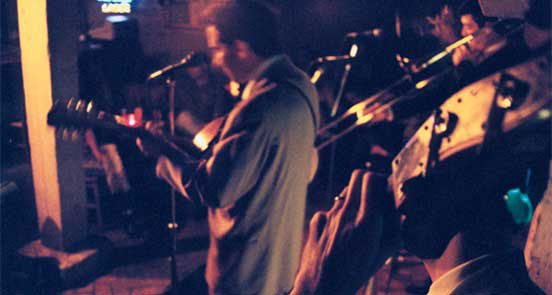